After a short two-hour flight from Lisbon, we arrived in Casablanca to begin our 16 day stay in Morocco. We were both excited to experience Africa for the first time! Morocco is an amazing country, a cultural amalgamation with Spanish, Portuguese, French, Middle Eastern, African and traditional Berber touches. A truely unique country, unlike any other!

The largest city in Morocco (population approx. 6 million), Casablanca serves as the country’s economic and commercial capital. Armed with our newly minted Moroccan Dirham, we were excited to explore the city and more importantly taste some Moroccan cuisine. Sadly, the selection of restaurants within the vicinity of our hotel was quite limited, and we began our journey with some surprisingly tasty sushi from a nearby hotel. One issue we had was a lot of the cafes are for men only – which was quite intimidating for women unless you know where to go.

Given the large size of Casablanca, the ‘Petit Taxi’ or red taxis are the most time and cost efficient method of transport. These small taxis are cheap but are not without their tourist traps as we discovered on our first trip – tourist tip: always ask for the meter to be turned on before hopping into the taxi! If you negotiate the price you will definitely lose! However, with taxis costing between $2-$3 US dollars, it was not such a big deal.

Our first port of call was the Hassan II Mosque, a monumental structure that is the third largest mosque in the world. The interior of the mosque can accommodate 25,000 worshippers with an additonal 80,000 capacity in the main square. With a 200 metre tower outside, the mosque creates a lasting first impression which is further exemplified when inside the main prayer room – the interior ceiling is 65 metres high! 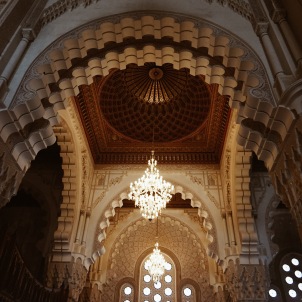 Processed with VSCO with b1 preset

Processed with VSCO with m5 preset

After two days in Casablanca we were definitely ready to move on, with the city not offering a great deal for the traveller/tourist, outside of the Hassan II Mosque.

We journeyed north along the west coast of Morocco toward Tangier, a port city from which Spain is visible across the Strait of Gibraltar (only 13 km away!). Our first impression was positive, with cleanliness clearly a higher priority here than in Casablanca, and palm-tree lined streets a common occurence. First order of business was lunch and we finally got to experience some traditional Moroccan food with an assortment of tagines, salads and even some sheep’s brain, all for an unbelievably cheap price – 20-30 Dirhams per dish ($3 – $4 AUD)! Following lunch we spent a few hours touring the Medina with a local guide and taking advantage of the ocean views before we headed inland.

Our destination for the night was the fabled ‘blue city’ of Chefchaouen, where all the buildings are painted in various shades of blue.  There are a number of theories that attempt to explain the obsession with blue paint, ranging from keeping the houses cool to keeping mosquitoes at bay. Whatever the reason, the town makes for spectacular viewing, particularly around sunrise and sunset! As the buildings are the town’s main attraction, our time in Chefchaouen primarily consisted of exploring the Medina, continually in awe of the various shades and combinations of blue around the city – you cannot get sick of it! The Medina is the centrepoint of activity within the town, and comprises hundreds of local shops and restaurants. We drank many a mint tea on the terrace of Casa Aladin, a Moroccan restaurant overlooking the main square! 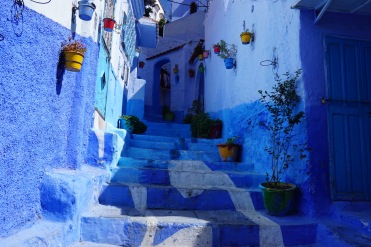 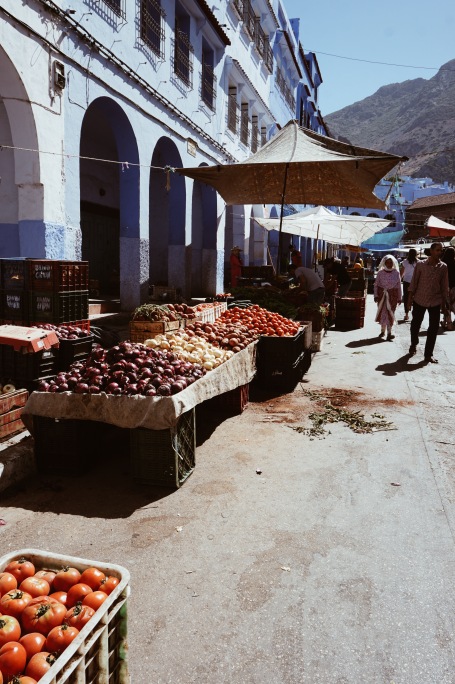 To give us a greater perspective of the city, we decided to hike the short distance to the Spanish Mosque, which overlooks Chefchaouen from the east. The pleasant hike passes some local houses with children tending goats and carrying water up from the town. We also learned about the significant cannabis plantations that exist in the hills surrounding Chefchaouen. Whilst not illegal, the government has taken some action by attempting to transfer some of the farms to other crops such as olive trees.

Processed with VSCO with m5 preset

With some last pictures for the ‘gram, we left Chefchaouen behind and turned our attention south to Fes!